Straight from the Mouth of 'EQUITY OF FEAR' Rudy A. Mazzocchi 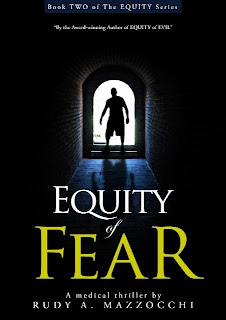 Go ahead… Write your Damn Novel… I Dare ya!


Someone once told me that there’s a novel in each one of us. Well, that’s probably true, but does that suggest that we should each carve out the time to take pencil-to-paper and start that initial manuscript?

Fortunately, I have a great day job that provides a good deal of down time; traveling on long international flights and an unmentionable number of private evenings in hotel rooms. With so much material and time at my disposal, it was an easy decision to attempt my hand at writing.


As an experienced start-up C.E.O. and entrepreneur, I also fortunately know about passion, persistence and patience. I quickly learned that these were the required ingredients in becoming a published author. Like all good ideas, it started with a nudge. This one from my wife while on a 14 day cruise down through the Panama Canal. I was bored with reading all those thriller novels that seem to be cut from the same mold, and after pacing the deck of the ship for the fifth time, she finally said it, “…go ahead, write your own damn novel, I dare ya!” Well those probably weren’t her exact words, but that’s what I heard.

It wasn’t long before I had drafted the first three or four chapters with an outline for several others buzzing in my head. Eclipsing page 100 felt similar to achieving one of my own self-imposed milestones in my businesses. The “rush” carried me forward until the word count indicator on my WORD document exceeded 165,000. Was that enough? Have I gone too far? What’s normal for a novel?

After a bit of research, I came to realization that 80,000-100,000 words were probably sufficient. Now what? I rushed to create an ending. It was magnificent. But the word count was now closer to 180,000. I needed to find someone to help edit this monster!
I then spent the next year working with an editor who actually taught me the “art of writing” – after I had already finished the manuscript. I now could add another “P” to my list mentioned above… “pain”.

I had no formal training beyond that Literature 101 class in college. Grammar, points-of-view, transitions, plots, sub-plots, protagonists, antagonists, speed-bumps…. WHAT? Then we needed to cut 80,000+ words from this masterpiece of mine! Okay, add another “P” to that list… “pissed-off”. So with a lot of persistence and patience my mentoring editor then told me that I need to find a publisher and literary agent… not necessarily in that order. He’d experienced the pain and expense of self-publishing and strongly advised against it.

After scouring a long list of qualified Literary Agents who seemed to focus on suspense/thrillers, I zeroed in on a short list of New York, Manhattan-based agencies. Camping out on the doorstep of one particular agency, I was finally granted an interview and was greeted with a special request… “Okay (sigh), go ahead, tell me about your story”.

Nearly twenty minutes later, I was made a proposition. “Well, tell ya what. IF one of our freelance editors agrees to review and then edit your manuscript, we’ll strongly consider representing you.” What do you mean EDIT? I just spent a bloody year of my life doing that!

Needless-to-say, I agreed, and nearly five months later we had a further-refined manuscript AND a signed contract in hand. So why weren’t publishers knocking down my door? The big publishing houses were not interested in considering a first-time author. No one told me that! The smaller publishing houses didn’t want to take the chance on such controversial themes. [Note: the original title of EQUITY of EVIL was Harvest of the Unborn. Yes, titles and covers are very important.]

Through my first editor, we eventually found Twilight Times Books, a small publishing house in Tennessee who was willing to take a chance on a new author, a new title, and a new genre. NOW all I needed was a good “blurb” from someone in my industry for the front cover. I wanted – and went after – Dr. Robin Cook, one of favorite authors since I was a young college student. He happened to also be a trained Ophthalmologist, a field that I recently entered with a new medical device company.

Another two months later, my house phone woke me at 7AM on a Sunday morning. It was Robin Cook. He’d read my novel and was prepared to give me a “blurb” for the cover. “Are ya ready? You have a pencil?” We were off to the printers the next day.

Yes, it has been a rather painful journey, but I would do it all over again without hesitation. So, go ahead I dare ya… write your damn novel. Just make sure you have the passion, persistence and patience because at some point it will be painful and you’ll eventually be pissed-off!

Rudy is best known as a medical device and biotechnology entrepreneur, inventor, and angel investor, with a history of starting new technology ventures throughout the U.S. and Europe. He's been privileged to have the 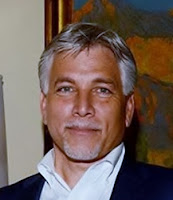 opportunity to see the newest innovations in healthcare and work with some of the most brilliant researchers, scientists and physicians in the industry.
Authoring more than 50 patents, he has helped pioneer new companies involved in cardiology, oncology, orthopedics, neurosurgery, ophthalmology and even embryonic stem-cell development. Through these efforts, he has become the recipient of many technology and business awards, including the Ernst & Young Entrepreneur of the Year in Healthcare and the Businessman of the Year Award.
Combining these experiences and opportunities, with thousands of hours of travel and long evenings in hotel rooms, he found the initiative to start writing a collection of medical thrillers based on true events, known as The EQUITY Series. The first book of which is entitled "EQUITY of EVIL" (released March 5, 2012), and the second entitled “EQUITY of FEAR” (released March 25, 2013).
WEBSITE / BLOG / FACEBOOK / TWITTER
Straight From the Author's Mouth at 3:13 PM