Straight from the mouth of Robert Herzog, author of A World Between

Robert M. Herzog has had his stories and poems published in Solstice Literary Magazine, Toasted Cheese, Downstate Story Magazine, Straylight Literary Arts Magazine, and South Jersey Underground. He was a physics major until he read Nietzsche, a political philosopher turned entrepreneur dealing with the major issues of our time, from energy and environment to technology and health care, a Brooklyn boy who’s climbed Mt. Kilimanjaro and remembers the taste of the first (and subsequent) great wine he drank.
Q: Please tell us about A World Between, and what inspired you to write it.
A: I’ve always been fascinated by physics, and was reading a book about quantum physics, which got me thinking (it was late at night) about how matter could be particles or waves, and what might happened if the solid version converted to the intangible.  That led to both how bureaucracies and politicians would react to it and to the kinds of people who could create such a strange phenomenon and those who could fight it.  And the synthesis that could occur between them.

Q: What themes do you explore in A World Between?
A: How consciousness can shape reality, for good or bad.  How organizations and their functionaries react to the new and unknown, more worried about their funding and maintaining power than what could be an existential threat – much like they do around climate change.  How love can be found in the midst of chaos, and how hatred can corrupt the human spirit.

Q: How picky are you with language?
A: VERY.  From Shakespeare to Dylan, I find great phrasings inspiring, and demand as good as I can give.

Q: When you write, do you sometimes feel as though you were being manipulated from afar?
A: Never.

Q: What is your worst time as a writer?
A: Those rejection slips.  I hate rejection.  Really.  Must be a childhood thing.

Q: Your best?
A: The exhilaration of a perfect phrase (at least to my ear!).

Q: Is there anything that would stop you from writing?
A: There are times when the occupations and obligations of the world interfere.  Which I always look back on with regret.

Q: What’s the happiest moment you’ve lived as an author?
A: This week.  Publication day!

Q: Is writing an obsession to you?
A: I’d have to say yes, it’s been a driving element in my life for all my life.

Q: Are the stories you create connected with you in some way?
A: of course.  Some relate to experience, and those that don’t are resonating with my passions and what imagination I have.

Q: Ray Bradbury once said, “You must stay drunk on writing so reality cannot destroy you.” Do you agree?
A: No. I’d rather experience “reality” and use it to create new realities.

Q: Do you have a website or blog where readers can find out more about you and your work?
I sure do.  it’s http://www.robertmherzog.com/ 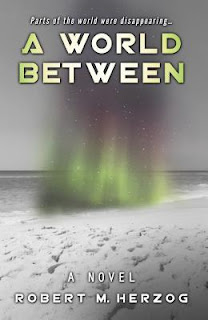 Parts of the world have disappeared. For a while, nobody notices. Or cares. But as an increasing number of voids disrupt the fabric of reality, threatening the foundation of our world, they propel some of the greatest minds on the planet to determine what force, godlike or human, is behind the change. Now they must race to stop a dread emptiness before it leads to global oblivion. A breathtaking novel that thrills on both an epic and human scale, A WORLD BETWEEN is an adventure at the frontiers of consciousness, where fractal geometry, quantum physics, and politics collide to create a story unlike any you’ve ever read.

Straight From the Author's Mouth at 9:18 AM