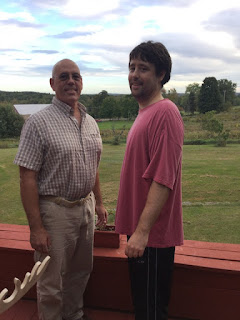 Leif Grundstrom-Whitney is the proud co-author of the epical satire The Hidden Chalice of the Cloud People; the wicked and witty character known as Facinorous contained therein is a product of his multifarious mind. He has been published in several obscure poetry journals (hold your applause). To say that he is an edacious reader would be an understatement worthy of Hemingway. If he had a spirit animal, it would probably be a raven who knows how to play a Hammond B-3 organ.

Jason Grundstrom-Whitney has been a Social Worker and Substance Abuse Counselor in the State of Maine for many years. In this time, he has introduced meditation (tai-chi, qigong, yoga, and meditation) groups to teens when told he would fail. This was one of the most successful and long lasting groups. He developed a Civil Rights/Peer Helper course that won state and national awards (for High School) and has worked as a civil rights activist. He has also worked as a long term care social worker and now works as a Hospice Medical Social Worker. Jason is a poet, writer, and musician playing bass, harmonica and various wind instruments. Lover of all styles of music he has played classical, jazz, rock, funk, country, blues, and rap. He is very excited to play bass with his brother’s band and his son’s. He is very proud to have co-authored The Hidden Chalice of the Cloud People with his son Leif.

The simple act of obeying the creative whim of the imagination or peregrinating along a certain line of thought that leads to words scribbled on paper fills our hearts with one of their greatest pleasures. Traversing the grandeur of the mind whilst admiring and luxuriating in the beauty and bewitching splendor of the ethereal regions of the Muse connects our spirits to the transcendent and the sublime in a manner similar to that which is described exquisitely by Wordsworth in his genius epical epopee The Prelude. When that creative sensation of mental exploration rolls through our minds, we feel jubilant and carefree and profound. The whole experience of writing enriches our souls; drowning our thoughts in joy and afflatus.

What more is there that we can tell? The blood of Orpheus polluted our ancestors’ generational well.

Is the art of writing part of an agonistic struggle to be heard,
Misreading illustrious predecessors in a manner almost absurd?

Let’s leave that a mystery for those of prodigious sagacity to solve. 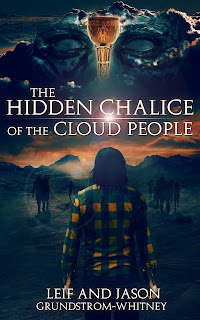 Writing fulfills a clamorous need, almost sacerdotal in its truculence, for creative expression. What could be as vital and important to an artistic soul?

To silence the howls of the persistent Daemon (the inscrutable force of creativity within each one of us) that haunts our deepest inwardness is the greatest single perk of writing. There is nothing so satisfying or rewarding as completing a complex literary project, particularly one of significant length.

The demands consist of nothing but a complete devotion to countless hours of hard work at your craft; pledging yourself utterly to your artistic duty as a sentence-shaper and story-summoner.

Though we succumbed to the allure of self-publishing, we are still very much in pursuit of a traditional publisher. For the moment, our book is published through Amazon Kindle Direct Publishing. There is not much of a “nitty gritty low down” to describe. The whole process took a grand total of ten minutes. They have really made self-publishing easy and accessible. If this answer bears a certain Hemingwayesque terseness, you have our apologies.

Our family has fully supported us throughout our pursuit of this wild literary endeavor. We have been lucky and fortunate in that regard. Their understanding proved invaluable during the whole writing process and we are grateful to them for the continued generosity of their permissiveness.

This is for pet lovers.  If you don’t own a pet, skip this question, but do your pets actually get their food on time or do they have to wait until you type just one more word?

The supernal landlords of the cosmos forbid a scheduled feeding should be missed! The pets, a prissy diva-like cat and two theatrical harpies (also known as parrots), would revolt and tear the house down board by board with fearsome tooth and piercing claw! Woe Betide the poor fool who shirks his responsibilities towards his pets!

This is for plant lovers.  If you don’t own a plant, skip this question, but if you do, are they actually still alive?

Yes, they are most certainly alive. Each one is a stubborn survivor needing very little care. It would be a difficult task indeed to stifle their vibrant vitality. They are tough living structures suited for an existence in a post-apocalyptic wasteland.

The creation of the book was handled in such a way as to eschew these issues. That is to say it was crafted in a rather disciplined fashion during the hours of the day wherein the possibility of interruption interfering with effort was slight.

The publishing process was mercifully unmarked by “crazy” incident. There was a certain ease to self-publishing with Amazon Kindle Direct. We welcome, however, “insane” events, so long as they are not pernicious or counterproductive, in our continued effort to find a traditional publisher.

The benefits of the social networks have yet to manifest. We are neophytes that have just recently joined Facebook and Twitter but our expectations are high. Linkedin should most likely be avoided by fresh authors seeking to promote their work. That particular website, from our experience, yields little success.

Book sales? What are those? We thought they were only lofty myths couched in the byzantine hearts of various extravagant fables. No, but seriously, the sales have been relatively mediocre so far and that is why we hired a skilled publicist to help us in the promotion department. A blitzkrieg publicity campaign, smothering numerous forms of media in a wide shadowy web, will hopefully increase the sales and visibility of our book.

One of us would likely drag forks of lightning down from a tempest-afflicted welkin to use as utensils for an ambrosial banquet. That individual would pluck the horn of the moon out of the gelid celestial abysm and then fashion it into a stylish cap. In all seriousness though, we would shout about having accomplished a lifelong dream and how rewarding the satisfaction of such a feat feels.

It is all worth it, carving a tremulous paradise out of the chaos of our experiences in the world. What is life without the miracle of a realized dream (artistic or otherwise) though? An empty shell of an existence, gutted by the malison of loneliness, withering unto an unmourned conclusion!

Straight From the Author's Mouth at 9:28 AM