Straight From the Mouth of 'Progeny' Patrick Greene

Some dark serendipity plopped a young Patrick Greene in front of a series of ever stranger films-and experiences-in his formative years, leading to a unique viewpoint. His odd interests have led to pursuits in film acting, paranormal investigation, martial arts, quantum physics, bizarre folklore and eastern philosophy. These elements flavor his screenplays and fiction works, often leading to strange and unexpected detours designed to keep viewers and readers on their toes.

Literary influences range from Poe to Clive Barker to John Keel to a certain best-selling Bangorian. Suspense, irony, and outrageously surreal circumstances test the characters who populate his work, taking them and the reader on a grandly bizarre journey into the furthest realms of darkness. The uneasy notion that reality itself is not only relative but indeed elastic is the hallmark of Greene’s writing.

Living in the rural periphery of Asheville North Carolina with his wife, youngest son Gavin and an ever-growing army of cats, Greene still trains in martial arts when he’s not giving birth to demons via his pen and keyboard. Patrick’s latest book is Progeny.

I always have stories floating around in my head, and being pretty easily impressed with myself, I figured I should share them with the world because they are (usually) just so bad ass! I’m also an actor and it’s rare to find roles that I really like so I started out following Stallone’s lead and writing a screenplay to star myself. Eventually, largely thanks to my wife’s nagging, I realized that the screenplay format can be limiting in terms of conveying certain aspects of character and story, and also by its potential budget, length, etcetera. Some stories need more than ninety pages, two locations and a cast of five-to-eight college age B-list stars.

Honestly, it’s amazingly fulfilling, and just fun. Having the opportunity to see my imaginings take a more solid and developed form is a fantastic experience.

The perks are the therapy of course, and also the satisfaction of creating a world and giving your characters a chance to grow and love and learn and, yes—die. Also, I like encouraging others to take up the pen, because I believe it’s just so good for the soul. Even if it’s not about being published, reading and writing are powerful activities for the mind and spirit.

Demands? I hardly view any of what I’m required to do as a writer to be unpleasant, so it’s hard to think of them as demands. I love every minute of it. 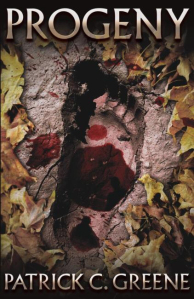 I was very fortunate to find Hobbes End, and at a good time. As a young publishing company, they were very open to submissions at the time and were willing and able to give extensive advice and input regarding how to make my work better. My first dealings with them were the Endlands series; two (so far) volumes of short bizarre fantasy and horror stories. Hobbes End’s president, Jairus Reddy, actually suggested I try my hand at a novel and that was all I needed. I feel I owe those guys a lot.

Fortunately, PROGENY has garnered good sales and reviews, so I guess it’s safe to say this is something I’m going to be doing for a while.

My wife has collected some of my backlog of short stories and compiled them in a collection called Dark Destinies, so I’m beginning to get a taste of self publishing as well.

My wife has been tremendously supportive. She always encouraged me to write, even above and beyond any of my other crazy pursuits, so I’m a lucky guy. My success has renewed her interest in editing and my oldest son has a story in The Endlands 2, so we’re becoming something of a publishing family.

This is for pet lovers.  If you don’t own a pet, skip this question, but do your pets actually get their food on time or do they have to wait until you type just one more word?

You know, I’m glad you asked this. We have three cats and they show no appreciation for all my hard work and dedication. It’s all about “when do we eat again?” and “I’d like to be brushed, so stop what you’re doing.” My wife feeds them well, but they often try to convince me they’ve gone hungry for several days. I’d like to see THEM do all the writing for a while.

This is for plant lovers.  If you don’t own a plant, skip this question, but if you do, are they actually still alive?

The outside ones are; except I’m not so sure about the catnip.

I’m a night owl; not much is happening during my prime writing time.

Publishing has always been pretty smooth—but screenwriting is a different story. PROGENY began life as a screenplay, and another “screenwriter” who was offering advice said the story was okay, but that I should forget about the Bigfoot parts! He said no one wants to see or read about Bigfoot. Since that time, there have been approximately seven blue million Bigfoot movies and books, all apparently moneymakers.

I use twitter, facebook and darkculturesocial.com. There was one called cryptozoocial.com that died within weeks of inception, so that was a bust. Goodreads seems to work out pretty well. Other than that, I feel like my time is better spent actually writing.

The sales are so good right now I’m just elated. Both Hobbes End and my wife do a great job of promoting and keeping the book in the public eye. Interviews like this are certainly helpful. J I think the subject matter and genre are things that will always find an audience so it’s lucky for me I like writing about them.

It’s just amazing to have people responding so well to my efforts. Being able to reach an audience and tell them a good story is a tremendous source of joy.

Well I guess it’s all a cycle. Every experience is potentially something to write about, and being an honest-to-Godzilla author now is another of those. Of course, PROGENY’s protagonist is a writer, so I guess I’m already recycling my experiences. I’ll always love horror books and horror movies and horror fans, so I foresee life just getting better and better all the time—and my writing will only become more terrifying!
Straight From the Author's Mouth at 3:34 PM