All writers share one experience in common:  Rejection.  Yes, that single three-syllable word can pack more punch than a swat team of grammarians in a first year college class.  I’ve known grown novelists crushed by the impact of a lone one-page letter in a returned SASE.  (You can tell by the thickness of the envelope that it ain’t holdin’ no contract.)  In New York, it is rumored that spurned essayists have been seen to (gasp) forgo imported and guzzle down domestic in their haste to heal the pain.
Rejection is the hurtin’, cheatin’ country song of the writer’s world.
We all know that tune.   Usually sung off-key, by editors who can’t do what we authors do, but have the power to keep us out of print.
Rejection slips serve only one useful purpose as far as I can tell: they prove to Revenue Canada and the IRA that we are indeed working writers and deserve all those measly tax deductions.
But wait – is there more?
In case you missed it, there is a hierarchy of rejection slips!  If you write for a living, or merely for the loving, you will undoubtedly have a collection that cries out for classification.
Keep them. Treasure them.  Devote a drawer to them.  (Better still, a steamer trunk.)  Make your own list of rejection translations and get to know the lingo.
Here’s my list, to get you started:

This means No.  Allow yourself ten minutes to rant, and then try another market.

Hey – you’ve reached them!  Maybe they can’t use this piece, but they like your style.  Send more.  Persist.  Be relentless.  That’s how I first got into Star Magazine.  I wore them down.

Go, go, go!  Whenever an editor gives direct encouragement, run with it.  Act immediately.  Revise and re-mail.  Invite her to dinner.  Walk his dog.  Do what you have to.  But don’t lose his interest.

I cherish personal replies from editors, not only for the time they take to write, but also for the hidden messages within.  Some are priceless.  Here are a few gems from my personal file (er…trunk):

“…not for us, but I think the ‘Idler’ uses satire.”
That’s right, pass it off to the competition and hope it sinks ‘em.  The ultimate publisher power play. 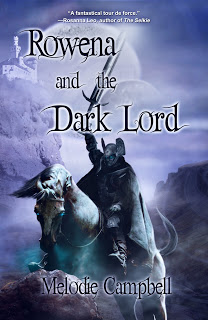 Dark magic…dark passions….
When Rowena is abducted from Arizona and taken back to medieval Land’s End, one thing is clear: she must learn to control her powers of magic. It isn’t easy being a modern girl in an archaic land, and when Rowena accidently conjures up a Roman Legion in mid-battle, Land’s End is on the brink of a war that could jeopardize everything and everyone she loves.
The stakes are raised when the Dark Lord reappears and traps Rowena in a cyclone of lust and passion. Once again, she is torn between the man she loves and the mage who fires her desire.
Purchase the book on Amazon.
Currently #2 Timetravel in Canada!  Top 100 in US!
----------------------------------------------

Melodie Campbell achieved a personal best this year whenLibrary Digest compared her to Janet Evanovich.
Melodie got her start writing comedy (stand-up and columns.)  In1999, she opened the Canadian Humour Conference.  She has over 200 publications including 100 comedy credits, 40 short stories and 4 novels. Her fifth novel, a mob caper entitled The Goddaughter’s Revenge(Orca Books) will be released Oct. 1. She has won 6 awards for fiction, and was a finalist for both the 2012 Derringer and Arthur Ellis Awards.
Melodie is the Executive Director of Crime Writers of Canada. Her humour column ‘Bad Girl’ appears in The Sage.
Connect with Melodie on the web:
www.melodiecampbell.com
www.funnygirlmelodie.blogspot.com
Facebook: MelodieCampbellAuthor
Twitter: @MelodieCampbell

Straight From the Author's Mouth at 6:38 AM