Straight from the Mouth of James D. Bell, Author of 'Maximilian's Treasure'

You Don’t Have to Wait 40 Years to Publish Your Novel!
I should know.  It only took me 35.

Okay, I’m not proud that it took so long to publish my first novel, but it only took seven years to publish the second!  That’s big improvement!

In 1977 my best friend and I were young lawyers defending citizens charged with crimes in Mississippi.  We attracted a bit of attention because we kept winning cases.  Jack was a loyal friend, an intrepid investigator, and a great researcher.  Together we regularly accomplished what at first seemed impossible.  Jack died twenty years ago; too young; too soon.

Our practice created many novel opportunities.  For instance, forty years ago a weathered elderly Choctaw man told us that he believed that Civil War gold was on his farm in Mississippi.  He believed that Maximilian, the Emperor of Mexico, sent gold to support the South’s war effort, and that none other than Jesse James (then a member of the Confederate Cavalry) was involved with the shipment.  The war ended when the gold was near his farm and was hidden there.  He asked us to help him look for the treasure.  This was too far-fetched to believe, but my friend and I said, “Why not?”  We traveled with him to his farm and had a great day listening to his stories while we searched with him.

You might think this unusual.  It’s not.  It’s just another day of law practice in Mississippi, where the unusual and outlandish is an everyday occurrence.

I started writing novels based upon some of our adventures over forty years ago, but I lacked the discipline to finish a whole book.  I didn’t have the right motivation.  I penned a few short stories and sent them to magazines, hoping that would kick start my writing career.

No response.  At last I received a rejection!  I thought about framing it as proof that my writing had finally attracted the attention it deserves from a publisher.  Years passed.  The unwritten stories kept bubbling up, needing to be told.  Yet, I couldn’t make myself finish a novel.

For years I shared my book ideas with my wife, bless her.  Finally, on New Year’s Day 2011, she dared me to finish a book that year.  She asked me, “Why do you want to write?”  I didn’t have a quick answer.  Then, it struck me that every book and every movie used to have a purpose, a “moral to the story.”  I feel that we have lost that purpose with some of today’s entertainment.  I am motivated to bring back the moral to the story.  That gave me my reason to write.  I finished our first novel, Vampire Defense, that year.

“Okay,” she said.  “You have a novel, now what are you going to do?”  I found a course at Millsaps College, “How to Sell What You Write,” taught by a publisher.  I followed the advice in the course.  Then, good fortune struck.  The teacher of the course agreed to publish my book.  I put as much work into selling the book as I put into writing it.  The work paid off.  The publisher told me it was his best-selling novel.  He was happy to publish my second novel, Maximilian’s Treasure, a book inspired by actual experiences.

Don’t wait 35 years to finish your work.  You have a purpose.  Find it.  Live it.  Write it.  Be ready to spend as much time selling your work as you spent writing it.

By the way, you really need to buy Maximilian’s Treasure.  It is an action-packed legal thriller filled with treasures that will enrich your life. 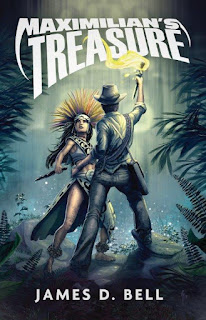 Rumors of a legendary treasure fuel a battle over possession of a Choctaw family farm.  Two young lawyers, John Brooks and Jackson Bradley, agree to help the family keep their farm.  Early legal success prompts the drive-by murder of the patriarch of the family.  The grandson chases the suspects whose bodies are found on the farm, scalped.  At the same time clues to a vast treasure are found on the farm.  Jackson, pursued by fortune seekers, adventurers, an exotic beauty and a homicidal maniac, follows the clues from a Caribbean reef to the Chiapas jungle.  John stays behind to defend the grandson and continue the fight for the farm.  His efforts are complicated by arson, murder, race riots, and the realization that he lost his one true love.  Though there is great distance between them, their adventures are intertwined as they rush toward a triple climax that could shake the world.  Join the adventure and discover your Maximilian’s Treasure. 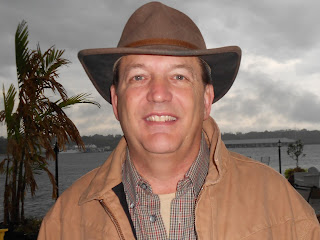 James D. Bell is an award-winning author and retired Judge who received the highest bar association approval ratings ever given to a Mississippi Circuit or County Judge. He is listed in Preeminent Lawyers, Outstanding Lawyers of America and Top 100 Attorneys of North America.  He is the author of two novels, Vampire Defense and Maximilian’s Treasure.  His short story, The Adventures of Sherlock Hound, was published in Mardi Allen’s collection, Dog Stories for the Soul, alongside stories from Mark Twain, John Steinbeck, Willie Morris and others.  The son of a Choctaw mother and a Mississippi businessman, Judge Bell is devoted to his wife, Joanne.  They live near Jackson, Mississippi and have four children.  Judge Bell returned to law practice but is frequently called back to the bench by the Mississippi Supreme Court for short term assignments.

Straight From the Author's Mouth at 5:31 AM